In the Spring of 2017 I took a food and wine writing class. This was a different style of writing than news writing. It took me out of my comfort zone and taught me how to put senses and emotion into an article. My article on Columbia area barbecue was published in Inside Columbia Magazine. 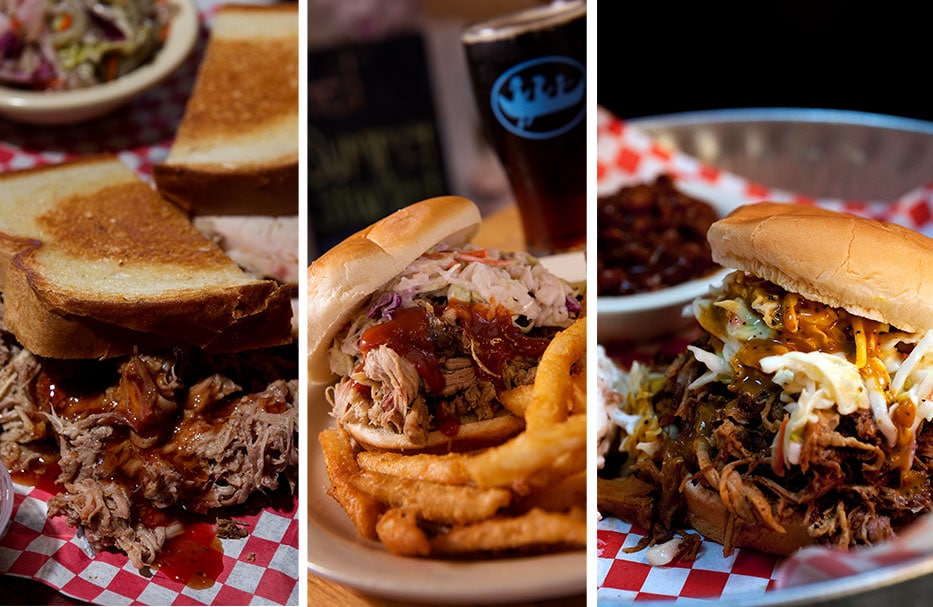 A Quest For Comfort

The sweet smoky smell hits you as you walk in the door. A friendly greeting and a seat amidst laughter begins the meal. Paper towels and an assortment of sauces line the end of the table. Whether you’re dining with friends or dining alone, the atmosphere feels like family. This is what you hope to find when entering a barbecue joint.

Missing Kansas City, my home, often means missing good barbecue. There’s something to be said about the heat of a thick sauce topping a heaping pile of smoky meat that you can somehow taste before it hits your mouth — something Kansas City pit masters seem to have perfected. I set out to find that taste in Columbia, my new city.

I pulled up to Smokin’ Chick’s BBQ’s storefront and entered. The sun was shining through the windows and I was met with an equally bright greeting, making it the perfect place to stop for an afternoon meal. Lissa Gaw-Orscheln, the owner, greeted customers as she made her way around the counter to meet me. She started the business with her husband, Chick, 15 years ago.
Smokin’ Chick’s BBQ uses a homemade dry rub to make their meals unique. “We experimented with it. Each meat has a different dry rub with it so it allows the flavor of the meat to come out with it,” she said.

The meat spends around 15 hours in the giant smoker out back in liquid smoke and the signature rub. Chick spends his day in the pit caring for it.

The time spent on the meat is obvious at first taste. The pulled pork sandwich had thick shreds of meat mixed with the classic Kansas City–style sauce that made my mouth water. The flavors soaked into the bun and penetrated every part of the sandwich as the textures blended together in each bite.

The sauce was a thick, deep red-brown and had that perfect tangy, almost spicy, zest that makes you reach for a glass of water every few bites. It was the flavor of home.

One reason Smokin’ Chick’s BBQ has become a local favorite is their community presence. The concession trailer can be found at events like the Roots N Blues N BBQ Festival and Art in the Park. If you don’t come to Smokin’ Chick’s BBQ, they’ll come to you.

My next stop on my quest took me north of town to Como Smoke and Fire. The smell of smoke and the clinking of dishes in the kitchen greeted me as I stepped through the door.
Matt Hawkins strode out of the kitchen, where he is pit master. It’s a family business, and Hawkins tries to make the rest of the employees feel a part of that as well.

“We opened up because we weren’t happy with the Columbia barbecue scene,” Hawkins said. “We knew what we wanted and it wasn’t out there. We mix the dry rub of Memphis, the sauce of Kansas City, the salt and pepper of Texas and incorporate it all into one style. It’s not Kansas City, it’s not St. Louis. It’s Columbia barbecue.”

Printed on the wooden menu is Como Smoke and Fire’s version of a grilled cheese, which immediately caught my eye. It includes your choice of meat topped with macaroni and cheese and squished between two pieces of Texas toast. I had to give it a try.

I bit through the crunch of the toast and into thick but perfectly crispy bacon mixed with soft pulled pork, the bacon being a pleasant surprise. I tasted the macaroni and cheese combined with the homemade Carolina-style sweet sauce. The sandwich was messy, just the way a barbecue sandwich should be, pieces of meat and noodles falling out on every bite. The salty hand-cut fries were the final addition to a full plate of flavors.

“Everything’s better when it’s homemade,” Hawkins said. “Others care about the meat and don’t care about the sides or sauce, and we want it all to be fantastic.”

The restaurant tries to encompass all flavors of barbecue for customers to choose from. Como Smoke and Fire offers a range from a sweet, vinegar-based Carolina sauce to a mustard-based, spicy Kansas City sauce, to name just two.

“We are out here to not only be the best in Columbia, but eventually the best in the state,” Hawkins said.

The atmosphere of the restaurant was just what I had been missing and was a nice combination of old favorites with new, Columbia flavors.

Shotgun Pete’s sits in a small, historic building in downtown Columbia. The inside is a mix of stained glass panels, awards, family photos, old movie posters and typical barbecue décor — a mix of old and new in a building that looks timeless.

If you make your way past the lunch counter and the antique freezer, you end up in a small courtyard. Sitting in the corner is a big black smoker — “The Magic Box.” This is where the good stuff happens.

Philip Peters, Jr., is the owner, and one of two employees at Shotgun Pete’s. “The Magic Box” was built by his father, who the restaurant is named for, and is a family heirloom. The smoker was given as a gift when Peters shared his barbecue dream with his father. It also happens to crank out some delicious meat.

“We consider ourselves one of the few true barbecue places in Columbia. We use hickory and oak woods, traditional tried and true in the smoker,” Peters said. “We make all the rub with about five spices and six sauces from scratch. I shop for the food every morning and do all of the cooking out on the smoker.”

The personal touches and the small number of employees doesn’t slow this joint down.

I was given a pulled pork sandwich that involved just as much meat on the bun as falling off of it. Peters pointed me toward the Kansas City-style sauce. I covered the meat in it and dug in.

After the first bite, a mix of juices and sauce was dripping down my face. I used every inch of my napkin. The pork was a mix of shreds and chunks, but all pieces were packed with smoky flavor. The sauce had a definite spicy kick to it but paired extremely well with the smoked pork.

Peters’s Southern roots and his father are the inspiration for his simple menu. He reminisced about drive-thru barbecue in the South where the only menu item was pulled pork. Peters only added a few items, such as brisket, to appeal to Midwestern flavors.

He believes in a good atmosphere, good service and good food in that order.

“We try to make you feel like you’re being taken care of,” Peters said. “You can have the best food, but people won’t want to go without good service.”

I left smelling like the delicious hickory smoke of the meat and couldn’t complain about that. The meat was delicious, but the welcome received from Peters was one of a kind. The back patio conversations in the sun reminded me of summers at home, and even smelled like them, too.

My quest to find good barbecue proved to be a satisfying one. Passionate mid-Missouri pit masters are making names for themselves.

In Columbia, you can find a unique blend of flavors from many barbecue hot spots. Pulling up a chair at these barbecue restaurants, I was happy to enjoy favorite barbecue flavors reminiscent of home and make new friends that made me feel like family.

Begin typing your search above and press return to search. Press Esc to cancel.